Only 3 clocks in silver cases are preserved from the 16th century.

This Turmchenuhr from approximately 1570 has a case that is partly cast from silver and partly has embossed reliefs on a brass background. The silver reliefs show virtues (Caritas, Prudentia, Fides). Further representations of virtues can be found on the base. The front has a silver dial with alarm disc and the original silver hand. Below the dial is a silver relief with a sleeping putto with hour-glass and skull and a motto Fugit Aetas vis Vanita ((Life-)Time passes and perishability is unavoidable). The movement consists of iron plates and brass pillars. The ebony base is inset with contemporary gilt silver reliefs showing virtues in the context of antique Roman legends (wood later). Southern Germany, probably Augsburg.

A further clock in a silver case with enamels by David Altenstetter was created around 1583 and was the personal chamber clock of the German emperor. Now in the Kunsthistorisches Museum Wien. 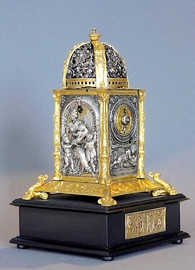 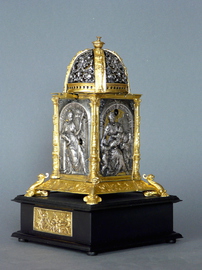 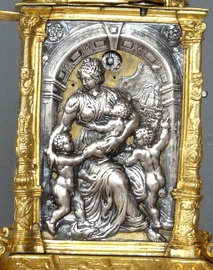 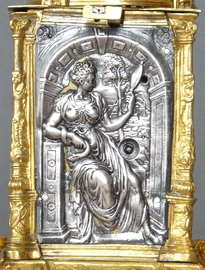 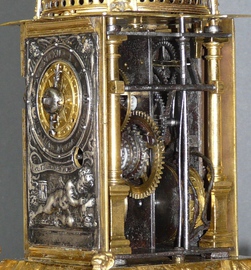